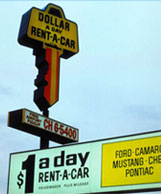 Dollar Rent A Car was founded by Henry J. Caruso in 1966 in Los Angeles, CA under the name "Dollar A Day Rent A Car."

Dollar's first operation was modest by today's standards. The fleet of cars consisted of a few Volkswagen Beetles with manual transmissions and no air conditioning. In addition to a smaller fleet size, Caruso ran into challenges while marketing his business. Many airports, newspaper, and local townships rejected the request to display their sign as they felt it constituted as a rate sign "Dollar A Day." Caruso would not let these obstacles sway his mission and as a result changed its marketing displays to say Dollar Systems Rent A Car. Shortly after the company changed its name to Dollar Rent A Car Systems, Inc. Within a year of starting Dollar, Caruso expanded his operations by opening five branches in Los Angeles and started to sell franchises nationwide.

Dollar's philosophy was impressive: to provide the public with a combination of the best service available in the industry at the most competitive prices possible. It was not long until Dollar turned that theory into success. In less than 20 years, Dollar Rent A Car Systems, Inc. became a major car rental company with many locations throughout the United States. Dollar is composed of both corporately owned locations as well as licensee operations. A significant part of Dollar's success can be attributed to the growth of the licensee system over the years. Dollar's licensees' entrepreneurial spirit and the continued success of their own businesses contribute to the success of the Dollar system.